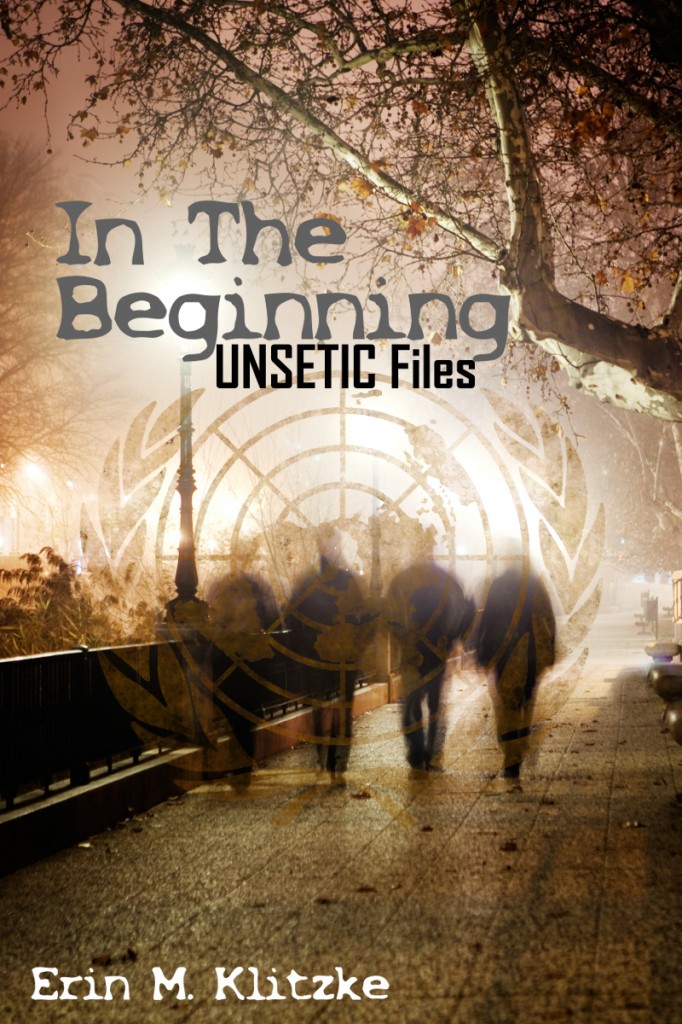 For probably the fifth or sixth time, the story hasn’t ended just because I cracked 50K–or, in the case of this year, the stories.  This year’s project, In The Beginning, is a collection of how key members of UNSETIC got their start in the United Nations Supernatural and Extraterrestrial Investigative Corps, including James McCullough and Bryn Knight, Timothy McConaway and Brigid O’Connell, AJ McConaway, Antony Bridger (brother of Lost Angel Chronicles character Hadrian Bridger and his wife, Ky), “Angel” Ridley Thys, and details the addition of the Portal Corps to UNSETIC’s banner.  The first story in the collection, Between Fang and Claw, is the story of how James McCullough got sucked in–and his first adventure with UNSETIC–and has clocked in at 35k itself and it’s not quite done (still have a chapter or two left to right, including a couple of climatic fight scenes).

Each story in the collection will be released on its own as an ebook once it is ready for sale.  They will later be collected into the In The Beginning collection for both e-sale and print sale.  I’m really excited about this collection, and while it’s not the direct sequel to What Angels Fear that some may have been waiting for, it is in the same universe and if you pay attention, you’ll see quite a few of the characters showing up–and end up with a deeper understanding of what’s going on with the Institute as well as what happens to some characters (such as Ridley Thys) in the future.

From the opening of Between Fang and Claw:

“I don’t think I ever thanked you for coming down to help us out on that case.”  I watched as the Federal agent across from me dunked his sandwich in a little plastic cup of au jus.  “Not sure we could have cleared it without your expertise.”

Agent Thatcher shrugged with one shoulder as he cradled the already soaking chunk of bread and meat in both hands.  “Worth it almost for the Italian beef.  You can’t get this up north.”

“So I’m told,” I said, smiling humorlessly.  I leaned back, idly tapping a fork I wasn’t going to use against the edge of the table.  The sense of agitation I could feel coming off of him belied his calm exterior.  I shook my head slightly, trying to suppress a frown.  “Whatever you’re trying not to say you might as well let loose, Thatcher.  I know you’ve got something trapped behind your teeth.”

He looked up from his plate, a brow quirking upward.  “How’s that?”

I shrugged slightly.  “I just know.”

Thatcher shook his head, glancing at the restaurant’s populace before relaxing a fraction.  “I’m beginning to see why you’re a rising star in the Bureau.  You’ve got a gift for reading people.”

I didn’t say anything, just waited.  More was coming.

I was hoping he was going to tell me why.

Thatcher continued to stare at me for a moment longer before he shook his head slowly.  His voice was quiet.  “Body or mind?”

I just smiled vaguely and he shook his head again.

“They’d want you,” he murmured, almost to himself. “But with that article in the Tribune, they won’t be able to make you disappear.”

My eyebrow arched of its own accord.  He smiled.

“Your brother,” I said.  “Whatever we’re talking about now, it’s got something to do with your brother.”

“Do you remember when Senator Monroe died?” he asked.

“Why does someone from Detroit care about Illinois politics?” I countered, trying to hide how unsettling the question was.  What does that have to do with his brother?

Thatcher nodded slowly.  “Then you remember.”

“I was twelve and it was all over the news.  Big deal, state senator moving up to federal, then killed?  Every newspaper, every station carried the story.”  I’d have known without all that, though.  The senator’s wife had been a school friend of my mother.  It’d been nine years since the senator and his wife had been killed, though.  A car accident on I-80 killed them both.  Not everyone would remember.  I frowned.  “You know, they had a daughter.”

“Seen her since then?”

“No,” I said.  Not since the funeral, anyway.  What did end up happening to her?  Damn, that was a long time ago.  I could remember playing soccer in the yard with the senator’s dark-haired girl, but the memories of that were old, faint and fading.  She and Jade had been better friends anyway.

I wonder if she knows.

Thatcher nodded.  “Think about that.  She was like you.”

So that’s what this is about.  I caught a fleeting sense of anger and pain coming off of him.  “You think your parents were murdered.”

“I know my parents were murdered,” Thatcher said.  “I think Senator Monroe and his wife were murdered.”  He met my gaze, eyes like a pair of flints, cold and hard.  “And I think the same people who did all that killing stole my brother and stole Kyle Anne Monroe, too.  I just can’t prove it.”

“Not yet,” I said softly.  The bare trace of relief that flitted across his face told me I was right in my assertion.

He nodded slowly.  “Not yet.  Someday.  Could be that I could use some help.  Think about that.”

I nodded, not quite certain what he was really asking for, or what it all really meant.  “Yeah, sure,” I said.  “I’ll do that.”

He smiled briefly and went back to his sandwich.  I stared at my hot dog.

Does Dad know anything about this?

I frowned to myself and realized that whatever appetite I’d had when we sat down, it’d evaporated when I pried Thatcher’s secret loose.  Not for the last time, I regretted talking it out him.  It was for the best, though.

Now at least someone else knows the truth.  Something.  My gaze flicked back toward Thatcher.

If they’d killed a senator, his wife, and two FBI agents to get to their children, what lengths would they go to in trying to silence anyone who even suspected the truth.

I smiled grimly to myself.  He’s got to know something.  I’m just going to have to find out what it is.

Spot a What Angels Fear character in there?  Fantastic.  Figure out why McCullough is familiar yet?