It’s T-minus two days to Nanowrimo.  For the first time in several years, I won’t be able to stay up until midnight Halloween night to get my first thousand words in before 2am on November 1.  I blame my new position at the store for these things, but I suppose a night’s rest and eight hours at the store won’t kill my creative process before I have a chance to get started.

This year’s project is something entirely new in an old setting.  It’s the sequel to Epsilon: Broken Stars (which was released on Smashwords, Barnes and Noble, and Amazon yesterday), called Epsilon: Redeemer.  It’s a change of PoV from Aaron Taylor, a trip into the head of Lucas Ross.

All those things he could never say to Aaron?  Now readers are going to know what some of them were.

My plotting process this year is proving to be much, much different than it has been in past years.  All of my other Nanowrimo projects over the years (When All’s Said and Done, When Angels Cry, Fate and Second Chances, an untitled fantasy piece, Awakenings, The Last Colony, and Ashes to Ashes) have been in new universes or universes created the year before (When All’s Said and Done and When Angels Cry are both in the Lost Angels universe, Fate and Second Chances and the untitled fantasy piece are in the same universe, and The Last Colony and Ashes to Ashes are both in the same universe).  Never have I worked with a universe like my Epsilon universe, where I’ve lived with it and developed it over the course of more than a decade.  Furthermore, the story of Epsilon: Redeemer will fit neatly into a three year gap between Epsilon: Broken Stars and an untitled project based on notes and concepts that originally appeared in drafts 1-3 of Epsilon (back when the project was one big–or two big–books).  In essence, I’ve stepped into somewhat uncharted territory in a universe where I know what’s gone before and what will happen after, but not the specifics of what’s happened in between.

I’m also doing it with a new character, one that didn’t exist before the draft of what became Epsilon: Broken Stars.

That’s right, Lucas Ross didn’t exist before Aaron’s story came to Caldin.  I actually came up with the idea for him as part of a short-lived Epsilon universe science fiction game (born as a “what if characterX had a brother and he joined the Resistance?”) and his importance completely snowballed from there.

And now he’s going to have his own book.

I started plotting in earnest this morning, mostly because I didn’t want to be tempted to start actually writing him before November 1.  He’s one of those characters that curls up in the back of your brain and lurks, waiting to be let out.  He’s a bit lower key than either Aaron Taylor or Caren Flannery and much less bitter than the former.  He’s got secrets, and it’ll be tricky to figure out when to reveal them–and how.

There’s a lot of stuff that he knows that he couldn’t tell Aaron.

The truth is, Lucas Ross is part of my attempt to make Aaron’s father, Daniel, a more sympathetic character in the long term, rather than just the monster Aaron thinks he is.  We’ll see how well I succeed in that when the time comes.

Now, however, I have to get back to my notecard outlining. 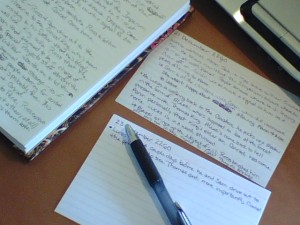