Anyone who follows me in any social media venue knows that I’ve got a new project chewing on my synapses lately.  I’m one of those unfortunates who can’t shove ideas away because they just keep coming back again.  They become relentless and won’t let me work on anything else, regardless of how much I may need to.  This was the case a few weeks ago, when I started working on an UNSETIC short.

At least, it was supposed to be a a short.  It was also supposed to be freewriting, something to just get the tale out of my system so I could get back to work on Redeemer, When All’s Said and Done, and other various projects.  Instead, it’s become all-consuming.

It all began with this:

“There are places in the world, Doctor, that we leave off maps because no one can get inside in the first place,” the Canadian G-man shouted over the sound of the wind.  “You try to drive into them and suddenly pop out on the other side.  We don’t understand how it works, we just know it happens.”

“I’m aware of the phenomenon,” El Stone yelled back over the sound of the rotors.  The former crime scene investigator held on to one of the oh-shit bars as she peered out the helicopter’s window at the trees below.  “But that doesn’t tell me why I’m here.”  Here was the ass-end of Alberta, somewhere up in forests so damned thick that no one would’ve noticed if they’d missed a twenty-mile stretch even if they’d been looking for the gap.  The sort of places they were discussing were rarely that large–mostly, the places omitted from the maps were two to five square mile areas, tops.  In the business, they called them Brigadoons when they reappeared, for the musical.  She knew that because she’d read the files on the flight up to Edmonton from the States.  There had been little else to do on the flight.

The G-man pointed to a clearing that hosted a small village and a narrow roadway that spiraled out of the forest.  It hadn’t been on the maps she’d seen before they’d left the RCAF base.  Her heart began to beat a little faster.

“One of them just opened up.” 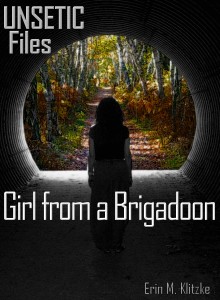 Now, let’s be honest, I’ve tweaked it a touch since I wrote that first bit, but that’s literally how it began.  The dialogue and the images caught me in the side of the head, much like the idea for What Angels Fear did a couple years ago.  Unlike What Angels Fear, however, I knew fairly quickly who the story was actually about.  It took me until this past weekend to come up with a title, however, and the title is Girl from a Brigadoon.

The story, of course, is about the titular girl–a woman, actually–who’s been missing for fifteen years.  It’s a paranormal yarn, a mix of mystery, fantasy, and suspense.  In other words, it’s something that I’m a bit out of my depth trying to write, since mysteries have never been my bag.  I don’t tend to read them and I’m feeling a bit beyond my ken trying to write one.  But the idea has been persistent and it won’t let me not write it.

I keep having to revise my word count goal upward as the ideas trickle in, because there’s no way it’s going to be anything under 40k words at this point.  I’m already nearing 14k words, and it’s only chapter three.  It’s going to be some hard work, but it feels right.

For people who have known me for a long time–as a writer and as a gamer both–there will be some familiar faces in the text.  Brigid O’Connell figures prominently in the story as one of the investigators and AJ McConaway is playing quirky, perky sidekick every so often, thanks to an (annoying) absence of her twin brother Tim.  Then of course, there’s Rebecca Reid, who the story really belongs to.

She is, after all, the girl from the Brigadoon.

Keep an eye on Twitter and such for ranting, whining, and occasional progress updates.

She offers two free fiction serials @ http://www.embklitzke.com/e557 and http://awakenings.embklitzke.com.  Stop on by and check it out.