As much as I really, really hate to do it, I’m going to have to make some significant changes to my writing schedule and my overall goaling.  This is largely due to a major uptick in the hours I’ve been working at the store–which are, in fact, incredibly insane hours as well as being very large in quantity.  I’ve gone from the 10-20 hours I was working two months ago, when I started releasing my work in ebook form, to working nearly 40 hours a week (add in an hour at either end to each 7-9 hour shift for transit time as well) and fighting a constant battle to not completely lose my sanity.

This, of course, means that my writing has suffered a bit of a setback.  I’m probably getting more writing done in the amount of time that I have to do it, but the time I’ve got to do it has been slashed severely.  This may change after the holidays, but I’m going to be perfectly honest and say that there’s no way humanly possible to finish the rewrite of When All’s Said and Done by 1/15/12.  I might be able to get the full draft of Epsilon: Redeemer done by then (the first 50K came in November–but since then, the story’s expanded beyond what I anticipated and the timeline itself for the universe has gotten twisted around a bit) and if I push I might even be able to finish the first draft of The Last Colony (more on that in a second) by the end of the month, but beyond that, it’s not going to happen.

I do have good news, however, and with the changes to the schedule comes an announcement.  Book One of Awakenings, which I’ve been releasing as a fiction serial at awakenings.embklitzke.com, is nearing completion.  After a bit of editing, I’ll be releasing it as an ebook through Amazon, Barnes and Noble, and Smashwords as edited copy with a few bonuses.  I haven’t decided what, exactly, those bonuses will be, but it’s entirely possible that they’ll include the original Marin work, The Vision, which would have run on September 13, 2001 in my university’s newspaper…if the events of September 11 had never happened.

So the schedule, prior to this writing, was thus:

Only time will tell whether or not this is a workable schedule (and it’ll be heavily dependant on my schedule at the store as well–but writing doesn’t pay the bills yet, so I have to keep the PTSL job).

If any readers have managed to wander out here, I welcome comments and whines about what you want to see me working on next!  They do light a bit of a fire under me to keep me working hard at what I love to do, and encourage me to spend brainsweat on projects, despite their ups and downs.

So, I know that I tweeted that I’d announce the actual name for SEKRET PROJEKT this weekend, and it was mostly that I didn’t get around to making a blog post to that effect–it was on the business cards I was handing out this past weekend at the Grand Valley Renaissance Festival, promoting my writing as much as I was selling other things (jewelry and sewing things).

The true name to SEKRET PROJEKT is What Angels Fear, and it’s the story that I talked about in this post last summer.  It’s a short work in the same universe as When All’s Said and Done, my first Nanowrimo project.  I hope to release What Angels Fear shortly after the release of the forthcoming Epsilon: Broken Stars, which is nearing completion.

A flicker of movement caught my attention and I tore my eyes away from the building, peering through the gap in the inner wall.  The angle made it hard, but I thought I’d seen…

There!  A gaunt figure stared at me from just within my line of sight.  It was a man, dark-haired and scrawny, dressed in what looked like sweats.  Though I couldn’t see his eyes, or really make out the features of his face, I had the feeling he was looking right at me.

Something about him reminded me strongly of Darien, though I couldn’t say what.  I tried to beckon him over.

He just shook his head and looked down.

What’s going on in there?

Something jerked the figure back and out of sight.  The massive gate in that inner wall ground shut with the sound of metal against stone.  No iron bars there, just solid sheets of metal.

Whatever it is, they don’t want people to know.  My pulse quickened and I stepped back from the main gate.

A hand grasped my arm.  I jerked, reeling away from the touch.  The hand snapped open and I went down on my butt in the grass.

“Who the hell are you?”  I demanded before I’d actually seen who’d grabbed me.

A woman about my age stood over me.  She had bristle-short red hair and was dressed in a black jumpsuit that made her look like some sort of extra from The Matrix.  She stared at me for a moment, then said softly, “You need to get out of here before someone else finds you.”

Someone else?  I was a little worried about anyone finding me.

She offered me a hand up.  I stared at it for a moment as if it were a snake about to strike.

She shook her head slightly, stone-faced.  “You don’t want to know.”

Her expression reminded me of someone else.  Oh, shit.  Darien.  That’s who it reminds me of.  It was the same blank mask of an expression that he wore most of the time, though this girl seemed much, much more functional than he did.

I took her hand slowly and let her pull me to my feet.

“You should get back to town,” she said quietly as she released my hand.  “You’re missing the show.”  She turned back toward the wall and walked toward it, looking back at me for just a moment.  With that last long, measuring look, she walked through the wall and vanished.

I don’t know about anyone else, but I don’t think I’d want Julia’s life.

What Angels Fear should hopefully be out by the end of the year.  And speaking of release dates… 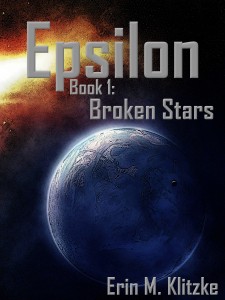 I still don’t have a solid one for Epsilon: Broken Stars, but I hit the 68k mark this morning, which means there’s less than 2k words left to write before I meet my 70k goal.  The tale will go a bit longer than that, however (I have at least two chapters yet to write, one in the section I’m working on now and one at the end of the book).  Price point will be $2.99 when it releases, and I’ll keep things updated here when it comes to release dates and the like.  I’m hoping for mid-month, but that’s going to depend on two factors: inspiration, and how fast I can get editorial turnaround from my volunteers.

This year’s nanowrimo project, however, will be the sequel to Broken Stars that focuses on Lucas Ross, leader of the Resistance and friend of Broken Stars narrator, Aaron Taylor.  There’s a few thoughts for that already bouncing around in the back of my brain.  Hopefully, that will take less time to materialize than Broken Stars has!