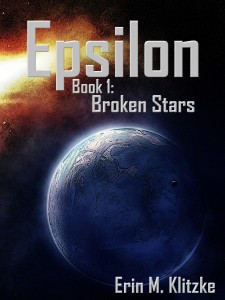 As you can tell, the writing work on Epsilon has slowed a bit the past several weeks, largely because I’ve been trying to work up a backlog for Awakenings (and succeeding).  This has also given me the chance, however, to have the first few chapters of the first book of the Epsilon series vetted by the folks at Critique Circle (much thanks to Freyr and Seagull, who have been critting every offering without fail) and to think a lot about what they’re saying and how I’m feeling about the piece.  The feedback has been amazing and mostly has been catching the small typographical stuff.  Folks are also weighing in a bit on the title question.  I had originally almost settled on Sins of the Father, but another thought train has grabbed me by the neck and I’m hanging on for dear life.

Part 1 of Epsilon‘s first book is already 44k+ words long, not including front material, dramatis personae, and the like.  There are a few sections where I could probably add a chapter or two, bulk it up a little to 50-60K words, and release it to stand on its own.  That would save me from the awkward three year gap that takes place in the middle of the novel.  This would mean rewriting huge chunks of what’s currently Part 2, but I’d be okay with that–and with the pressure of a Book 1 already unleashed upon the world, I’d have to dedicate myself to pushing out the second book (and so on) as fast as me and any of my editors can get it done.

Sins of the Father, however, wouldn’t make a good title for Part 1 at all, not the way it’s written right now, and that’s not really going to change.  I did have a suggestion from a longtime friend, though, for a title based on the very first few pages of the book, which I foisted on him one day when he was complaining about being bored at work.  The title was Broken Stars, which definitely describes Aaron William Taylor and his new-found friend and cohort Lucas Ross very well.  I’ll have to get some friendly friend types to weigh in on this…but with some input from Erik, I’ve mocked up a cover.

Looks pretty neat if you ask me!  If I do end up going this route, depending on the editing of the project, it would probably end up being released as an ebook by the end of September, maybe, probably at a pretty low price point ($0.99-$2.99) through Amazon, Barnes and Noble, and Smashwords (since if I do this right, Smashwords will then distribute it to the Apple Bookstore, Kobo, and others).

Volunteer editors wanted; comment here, contact me on Facebook, or shoot me an e-mail at doc (at) embklitzke (dot) com (or the usual hotmail address, if you’ve got that one).

Update: per several suggestions (including the one below), I’ve done a fresh mock-up of the cover with darker lettering.