Apologies for having missed last week’s Snippet Sunday–I had intended to post something while on my flight back from Phoenix, but the Wi-Fi on my plane was sadly malfunctioning. 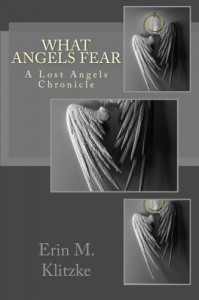 This week’s snippet is from What Angels Fear, the first story of The Lost Angel Chronicles.

From the outside, Andover Commonwealth looks like a normal town, but when Julia Kinsey takes over her late uncle’s shop, she discovers that the tiny Michigan community has a far darker side than she ever imagined.

Julia used to spend summers with her aunt and uncle in Andover and she’s no stranger to its more run-of-the-mill oddities, including the local preacher who’s always given her the creeps.  From the moment she first sees the Reverend’s ward, Darien, her life is turned upside down as she’s driven to dig deeper into the community’s darkest secrets.

And Darien might just be the key to it all.

It’s all connected to the place outside of town, the Institute, the focus of most of the town’s activities–religious and otherwise–and Darien knows something about that place, something he can’t or won’t talk about.  All Julia really knows is that she needs to get him out of town before it’s too late.

Twilight was coming onto the world when I turned down the dirt road that led to the house where my aunt and uncle had lived for almost forty years.  It was bigger by half than it had needed to be, because they’d never had children of their own.  They’d made up for that by having my dad and his siblings there whenever they could—weeks at a time every summer for us.

Someone was shouting out in the fields near the roadway as I drove by.  Fireflies and moonlight brightened the world as I glanced sidelong, out into the grass that gave way to trees a few hundred feet from the edge of the road.  Beyond those trees and a bend in the road was the old house, a few minutes further down.

The fireflies swirled around a lone figure out there in the grass, shouting at the sky.  I couldn’t quite make out who it was.  I pulled to the side of the road and shut off the engine, climbed out of my car.

Whoever was out there was yelling loud enough and fast enough that the words tumbled over each other, impossible to understand.

I leaned against the car, squinting into the dim.  The shouting started to taper off and I started to make out some of the words as the darkness deepened and time wore on.

“I did every fucking thing that they wanted me to, so why the hell are they still doing this to me?  Can you hear me, God?  Why are you letting them do this?  Is this what you wanted?  Can you hear me up…there…”

His chest heaved twice and he doubled over, disappearing behind the tall grass.

What in god’s name was that about?  Is he okay?  Whoever he is…  I started to wade through the grass toward where he should have been.

There wasn’t anyone there.

There had been, though, judging from the pile of vomit I nearly stepped in while looking for him.  That was the only sign that anyone had been there.

No, he’s got to be here.  Otherwise he just…snuck off or something.  I should’ve been able to hear that, though, or see him, or some sign of his passage.

All I could hear were the cicadas, all I could see were the fireflies and the moonlight streaming down, now that the light of day had faded.

I turned to leave and saw a crumpled scrap of paper near the toe of my sneaker.

It was an ad torn out of the chapel’s weekly program, I could tell that much in the dim light.  I’d seen them before, knew what they looked like.

I walked back to the car and turned on the dome light.

The Agapeistic Center for Religious Studies.  That’s what the ad was for.  They had a big installation on the other side of town, were probably Andover Commonwealth’s biggest employer.

Come to think of it, I didn’t like the feel of that place, either.  Even driving past it was enough to give me chills, ever since I was a kid.

I started the engine, happening to glance toward the field again as I started to pull onto the road.

There he was, staring at me.  I slammed on the brakes, staring.

I blinked and he was gone.

My heart was in my throat as I sat blinking at the field.

It took a few minutes, but I managed to convince myself that I was just tired and seeing things before I finished the short drive home.

I pulled into the drive beneath the old willow in the yard and parked.  Grabbing my overnight bag from the backseat, I started for the house, grateful to be home and looking forward to a shower and my bed.

Partway to the door, I realized the shadows the moonlight was casting through the willow branches were wrong.  My heart started to beat faster as I looked up into the tree.

For a moment, I thought I saw something there, slender and flame-haired.  I blinked.

I scrambled for the house.  It took the rest of the night for me to calm down and convince myself it was all nothing but my imagination.

I still had nightmares, though, and they were filled with the desperate face of the boy on the green and sinister laughter that felt too damned familiar not to be real.

Monday was going to suck, and hard.